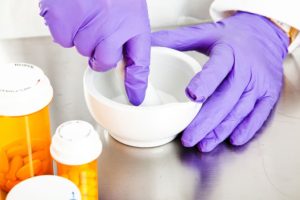 Following on the heels of increasing FDA enforcement, state regulators across the country are focusing enforcement efforts on sterile compounding pharmacies as well. Although the fungal meningitis outbreak in Framingham related to safety problems, state compliance concerns extend beyond tainted medications to a wide range of other compliance issues affecting sterile compounding pharmacies, including Medicare and other FDA requirements.

In addition to the PCQA requirements, state compounding pharmacies need to be mindful of state regulatory priorities. For California pharmacies, the Pharmacy Board of California is paying greater attention to compliance with its own regulations governing sterile compounding. One of the most frequently cited deficiencies during Board inspections, for example, is written policy and procedure manuals that are not current and precise or that fail to explain in detail the processes used to compound sterile drugs. Other deficiencies include the failure to determine the risk level of sterile products being compounded, the failure to verify sterilization techniques, failing to document personnel training, and failing to establish “Beyond Use Dates” (BUD) for sterile products.

Compliance with compounding requirements also has serious implications for Medicare providers utilizing compounded drugs in their practice. Currently, Medicare Part B will pay for compounded drugs that meet the criteria for coverage. However, the Centers for Medicare and Medicaid Services (CMS) has taken an aggressive position in recent years to prevent fraud, enforcing the False Claims Act against providers and pharmacies found submitting false or fraudulent claims related to compounded drugs.

Amid the heightened scrutiny and changing landscape of government enforcement, it is important for pharmacies to review their compliance plans for potential exposure to liability. Compounding pharmacies would be well advised to increase their compliance efforts to ensure that they are managing evolving risks effectively and working proactively to prevent problems that may trigger government audits and investigations.

Farooq Mir is an associate with Nelson Hardiman and works with California Pharmacies on Compliance with state and federal regulations. For further information, please contact him at [email protected].

(2)The Verifying Authority and Legality in Drug (VALID) Compounding Act, introduced by Congressman Edward Markey on May 23, 2013 as H.R. 2186, for example, proposes FDA regulation of both sterile and non-sterile products produced by compounding pharmacies.