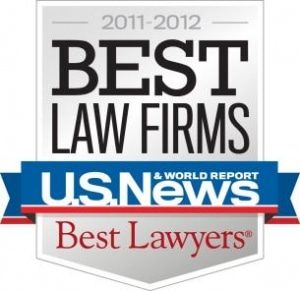 In the healthcare law firms category, U.S. News & World Report awarded top tier rankings to a total of 19 firms in California, 15 of which are large national law firms, including Arent Fox, Davis Wright & Tremaine, and Foley & Lardner.  Of the four regional law firms named to the list, including San Diego-based Higgs, Fletcher & Mack and Procopio, Cory, Hagreaves & Savitch, Nelson Hardiman was by far the smallest firm included.   The other Los Angeles-based regional firm to receive the top ranking besides Nelson Hardiman was Hooper, Lundy & Bookman.

This is the second edition of U.S. News Media Group and Best Lawyers’ highly-anticipated annual analysis of nearly 10,000 U.S. law firms by practice area. The national first-tier rankings will be featured in U.S.News & World Report’s Money issue, on newsstands November 15, 2011; the national and metropolitan first-tier rankings are featured in the “Best Law Firms” standalone publication, which is being distributed to 30,000 general counsel and in digital format to 58,000 private practice lawyers worldwide; the rankings in their entirety are posted online at http://bestlawfirms.usnews.com.

Full data for the law firms that received rankings is available online, from the largest firms in the country to hundreds of one-person and two-person law firms, providing a comprehensive view of the U.S. legal profession that is unprecedented both in the range of firms represented and in the range of qualitative and quantitative data used to develop the rankings. Achieving a high ranking is a special distinction that signals a unique combination of excellence and breadth of expertise. The mission of “Best Law Firms” from the start has been to help guide referring lawyers and clients — from the country’s largest companies needing corporate legal advice to individuals needing to get a divorce or write a will — issues that have a bet-the-company implication (in the case of a corporation) or a potentially life-changing result (in the case of an individual). “U.S News has more than two decades of experience in providing the public with the most accurate and in-depth rankings of a wide range of institutions, including our Best Law Schools rankings,” says Tim Smart, Executive Editor of U.S. News & World Report. “Law firms are an integral part of our rankings and a natural accompaniment to the law schools rankings.”

“Best Lawyers was very pleased with the reaction from the legal profession and from legal clients to the first edition of the “Best Law Firms” rankings,” says Steven Naifeh, President of Best Lawyers. “By combining hard data with peer reviews, and client assessments, we continue to believe that we are providing clients with the most thorough, accurate, and helpful rankings of law firms ever developed.” Media inquiries: [email protected] or [email protected]

About Best Lawyers
Best Lawyers is the oldest and most respected peer-review publication in the legal profession. For over a quarter century, the company has helped lawyers and clients find legal counsel in distant jurisdictions or unfamiliar specialties. The 2012 edition of The Best Lawyers in America includes 41,284 lawyers covering all 50 states and the District of Columbia and is based on more than 3.9 million detailed evaluations of lawyers by other lawyers. Best Lawyers also publishes peer-reviewed listings of lawyers in nearly 70 other countries, covering many of the world’s major legal markets. Best Lawyers lists are excerpted in a wide range of general interest, business and legal publications worldwide, reaching an audience of more than 17 million readers.