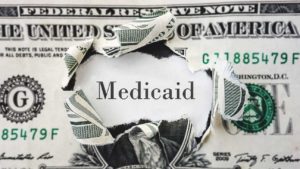 Although the latest (and one can never say “final”) GOP attempt to yank away the Affordable Care Act (ACA) as the law of the land —through the Graham-Cassidy Bill — failed before even reaching the Senate floor, Republicans are reportedly still looking for ways to reduce healthcare expenditures, and this means they’re gunning for Medicaid.

Medicaid is the federal healthcare program that insures low-income or disabled individuals through funding to the states. But Republicans in the House are talking about decreasing that funding. This could prove disastrous for the nation’s nursing homes, which are already negatively impacted by Medicaid’s lower reimbursement rates (as evidenced by generally inferior quality ratings on the federal government’s rating system for Medicaid-dominant facilities).

There are around 1.4 million people in this country living in nursing homes, and a whopping two-thirds of them are covered by Medicaid. To put the bottom-line in perspective, nursing homes can see a profit of around 10% or more on Medicare patients, but typically experience a shortfall of 2% for Medicaid patients. And the fact that so many of their residents are covered by Medicaid makes the problem more severe and often leads to a lower quality of care for some facilities.

Of course, this will vary by geography, but every state except Iowa has 51% or more of its nursing home residents covered by Medicaid (Iowa’s rate is 47%), right on up to Alaska, where 83% of nursing home patients are Medicaid beneficiaries.

Although lower reimbursement rates affect every aspect of healthcare or maintenance within nursing home facilities — such as obtaining medications, oxygen, and medical equipment, as well as the means for necessary building operations and basic elements like food for residents — one illustrative example of how Medicaid’s lower payment schedule impacts patient care at nursing homes is in the lifeblood of the facilities: the staff.

Nursing homes where Medicaid is the dominant payer normally don’t have the means to employ as many healthcare professionals as facilities with a higher percentage of Medicare beneficiaries or private insurance patients. And since one type of star rating that the Centers for Medicare & Medicaid Services (CMS) uses to gauge the quality of facility centers around the ratio of nursing staff to residents, this difference correlates with lower ratings for Medicaid-heavy facilities.

These statistics reflect the current state of Medicaid-reliant nursing home facilities. But there’s an additional worry on the scene. If Republican lawmakers do succeed in decreasing Medicaid funding to states, what is likely to happen to already struggling facilities and the residents that rely on them?

States would be forced to make drastic changes in that case, perhaps by narrowing coverage (covering individuals for a shorter period of time, for instance, or restricting coverage for certain individuals altogether), or by reducing their Medicaid reimbursement rates even further. This can only widen the already significant disparity between Medicaid-dominant facilities and those with a majority of Medicare or private insurance clients. And of course that means it is likely to impair those facilities to an even greater degree.

“It’s very likely that if Medicaid payment rates freeze or decline, there would be adverse effects,” Vincent Mor, a professor at the Brown University School of Public Health, told Kaiser Health News. “Nursing homes that can will get out of the Medicaid business if it’s at all possible. Those that can’t will try to keep their beds as full as possible and live with a negative margin and reduce food, reduce staff and try to struggle along.”

Mor also noted that slashing Medicaid funding to states may not ultimately result in the desired savings to the federal government.