Anthem-Cigna Merger Struck Down Again, This Time in Appellate Court 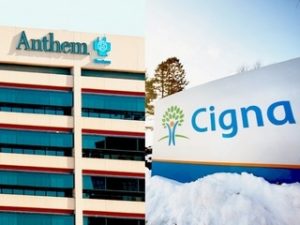 The old song tells us that breaking up is hard to do, but apparently it’s not any easier for insurance companies…even when they hadn’t actually gotten to the point of merging yet. And even when one side just isn’t that into the other any longer.

There is a new milestone in the ongoing $54 billion drama that is the proposed Anthem-Cigna merger: late last month, the U.S. Court of Appeals for the D.C. Circuit upheld a lower court ruling that prevents the healthcare giants from joining forces on the grounds that a merger would interfere with competition and prove detrimental to the country’s employer healthcare market.

Judge Judith Rogers, one of the panel of three judges that heard the appeal, opined: “We hold that the district court did not abuse its discretion in enjoining the merger based on Anthem’s failure to show the kind of extraordinary efficiencies necessary to offset the conceded anti-competitive effect of the merger in the 14 Anthem states: the loss of Cigna, an innovative competitor in a highly concentrated market.”

Anthem may not be celebrating the appellate court’s decision, but the Department of Justice certainly is. The DOJ, along with 11 states and the District of Columbia, filed a suit to prevent the merger nearly one year ago.

Deputy Assistant Attorney General Brent Snyder of the DOJ’s Antitrust Division said that the decision “confirms the district court’s conclusion that the merger would not have provided real benefits to consumers, but instead would have harmed competition in these important markets.”

AMA President Dr. Andrew Gurman had this to say in a statement: “The appellate court sent a clear message to the health insurance industry: a merger that smothers competition and choice, raises premiums and reduces quality and innovation is inherently harmful to patients and physicians.”

Merger proposal bumpy from the start

The merger between the mega-insurers was first agreed to on paper in July of 2015. Not long after, executives at the two companies found themselves in a contentious relationship. Right out of the gate, Cigna CEO David Cordani and Anthem CEO Joseph Swedish could not agree on which of them would head the company that would emerge from the deal. (Ultimately, Swedish was chosen.)

Reports of ongoing hostilities between the companies hit the media the following year­. And after the DOJ initiated the suit against the insurers in July of 2016, Cigna appeared checked out of the deal. Even more strongly still, U.S. District Judge Amy Berman Jackson said that company officers were “actively warning against” the merger with Anthem.

At that point, Anthem filed for an appeal, and Cigna tried to bow out of the agreement altogether.

In February, when Judge Jackson ruled that the industry giants could not combine (in part because a merger could adversely impact consumers in the 14 states where Anthem does business as Blue Cross Blue Shield), Anthem obtained a temporary restraining order that prohibited Cigna from extricating itself from the agreement. The fate of that order will be settled in a Delaware court this month.

Although Anthem has spent a great deal of time, money, and effort in trying to make the proposed merger a reality, there’s only speculation at this point as to whether the insurer will appeal the decision and ask for an en banc review.

Meanwhile, Cigna’s efforts are being put toward trying to end the agreement with Anthem, and, in the process, trying to collect nearly $15 billion ($13 billion in damages over the failed merger and a $1.85 billion break-up fee). In a large-scale case of corporate finger-pointing, Cigna is claiming the merger’s failure is a result of Anthem’s breach of the agreement, and Anthem is alleging exactly the opposite.