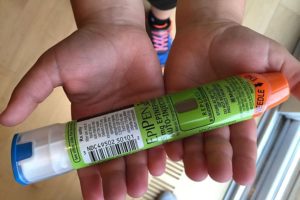 Connie Green is the co-founder of the group California Advocates for Food Allergies. She is not alone in her support of a new California law that allows businesses and organizations to stock EpiPens in the event of an emergency. This law expands legislation introduced in 2014 that required K-12 schools to reliably have EpiPens on hand.

Green points out that allergic reactions are not limited to schools, hence the need for the new law. “Anyone can develop allergies to any food, even to foods they have eaten for many years,” Green says. “You can’t be prepared, so you want them everywhere just in case.”

EpiPens graduate from school to the wider world

Governor Jerry Brown signed legislation earlier this month that would allow businesses and organizations like preschools, colleges, summer camps, theme parks, and restaurants to have on hand a supply of epinephrine auto-injectors (EpiPen is the most commonly known model).

The law allows physicians to prescribe epinephrine injectors to organizations and businesses (rather than to just a single patient) and allows pharmacies to fill those prescriptions. Prior to AB 1386, prescriptions were only permitted for individual patients and K-12 schools.

Many people are celebrating the new law (AB 1386), including healthcare professionals, parents, and advocates, hailing it as a “potentially life-saving move.”

However, the law doesn’t take effect until January 1st, and it will not be a requirement as its 2014 predecessor was. Rather, it will allow these organizations to stock the auto-injectors and, if necessary, use them on an individual in allergic crisis. But whether businesses will want to take on the voluntary expense and the responsibility of stocking and administering the medication is a question currently without an answer.

Administering the med is a weighty responsibility

The responsibility of administering epinephrine is not an insubstantial one. Dr. Bradley Chipps is a Sacramento-based allergist and pediatric pulmonologist. He says that epinephrine auto-injectors are easy and safe to use for the most part, especially in the case of a healthy individual. However, certain patients might have an underlying condition—like a type of heart disease or an irregular heartbeat—made worse by epinephrine.

“But again, an event that is emotionally charged can masquerade as anaphylaxis,” (a serious allergic reaction), Chipps says. “Sometimes it is even hard for me to be 100% sure at first glance.”

Chipps urges training and education for all laypeople who may have to administer the med. Further, he stresses the need for clear directions to always be attached to the auto-injector, whether or not training was given for the people in the position to use it.

The law addresses some of Chipps’ concerns: entities seeking prescriptions are required to undergo training in how to correctly administer the medication. And further, the law protects organizations from liability for potential damages associated with administering the drug, which naturally reassures those worried about placing themselves at risk when they act in the event of an emergency.

In addition to the responsibility that businesses and organizations may not want to take on, another issue at hand is that of expense. One package (which contains two doses of epinephrine) currently comes with a $600 price-tag. A recent survey by the consumer group Public Citizen shows that this cost is substantially greater than any other wealthy country.

Mylan is the manufacturer that acquired the rights to EpiPen in 2007. It also sponsored AB 1386. Although the legislation had no official opposition, Mylan has been criticized for government lobbying and for implementing hefty price increases.

The new law calls for an auto-injector and does not specify that the epinephrine be the EpiPen model specifically. However, Mylan holds a patent on the auto-injector device that doesn’t expire until 2025, and there is not a comparable device on the market. The company has plans in the works to develop a generic counterpart of the EpiPen which would come at a lower cost.

“We acknowledge the fact that EpiPens are life-saving for a person suffering a severe allergic reaction,” a letter from Brown to congressional leaders stated. “But Mylan’s arbitrary manner of pricing and their utter lack of transparency put those in need of the drug at a terrible disadvantage.”