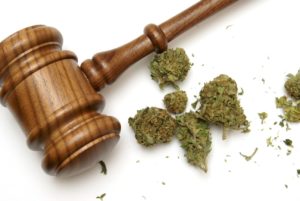 Despite the growth of the legalized marijuana industry promising big payoffs for investors, one can imagine M.C. Hammer’s “Can’t Touch This” as a soundtrack playing in investors’ minds. Regardless of how many states sanction its use for either medical purposes (to date, 25) or recreational (four), the sobering fact remains that cannabis—along with narcotics like heroin—is a Schedule 1 substance under the Controlled Substances Act and therefore, its distribution is a federal offense. So until and unless that changes, many investors may opt to keep their resources a safe distance away, no matter how tempting the potential rewards.

According to Adam Bierman, founder and CEO of MedMen (a company that consults for the medical marijuana industry), the day when cannabis is permitted by the federal government is not likely to come anytime soon. “We are not close here in the U.S. to seeing marijuana become federally legal,” he says. He also opines that Americans are unlikely to see “real capital-market exposure and participation and activity for this space.”

MedMen, in its own words, is “the only full-service management company serving North America’s legal cannabis industry.” Based in Culver City, MedMen began as a chain of medical marijuana dispensaries in 2010. By 2013, it had closed its dispensary doors and instead began working to assist other marijuana businesses in managing their operations and growth.

ArcView Market Research reports that companies in the legalized marijuana industry will see almost $7 billion in sales this year, which represents a rate of growth of 25%. And yet, with the federal illegality looming large, it doesn’t take a leap of the imagination to comprehend why investors otherwise primed for opportunity would rather put their money elsewhere.

But that’s not deterring MedMen.

Last month, the company launched the $100 million MedMen Opportunity Fund, a private equity vehicle that the company says is the first of its kind. Wicklow Capital, based in Chicago, is the largest backer in this initial round of investments. Bierman says that he expects first-round investors to be individuals with a high net worth or family offices. Wicklow Capital, a firm that has other marijuana investments in Illinois and New York, fits that profile.

The federal law prohibiting marijuana use is likely to dissuade bigger investors—with billions in assets—from joining Wicklow Capital. And this despite the 2009 memo from the Obama Administration to federal prosecutors encouraging them not to prosecute individuals or businesses engaged in the legal use of marijuana in states where the drug has been approved in some form. (That, of course, doesn’t mean that federal prosecutors can’t or won’t enforce the law.)

If larger investors were to buy shares in the industry, they would need to create a “special vice fund” for the purchase. Still, money funneled into the cannabis business would fall under the Catch-22 variety since it may very well breach the mandates under which the investors operate.

Is Nasdaq not 420-friendly, or is there an unknown variable in its decision?

The climate on Wall Street is a factor that medical marijuana businesses that wish to enter the public trading world must face. No matter how vigorously that business is booming at large, it’s not a shoe-in on Wall Street. Bloomberg reports that in the U.S., “no established publicly traded companies are dedicated to the cannabis industry.”

MassRoots, a social network for marijuana users and therefore decidedly dedicated to the cannabis industry, applied to list shares on Nasdaq’s public exchange in May. The application was rejected. MassRoots posits that the reason for the rejection was that Nasdaq believed it was assisting in the sale of an illegal substance. (According to a Nasdaq spokesperson, the company policy is to refrain from commenting on listing applications, so it appears that MassRoot’s theory will remain speculative.) The social network states it has plans to appeal, and since Nasdaq’s rebuff has begun a campaign to garner public support.

“If we were a social network for tobacco users or alcohol consumers, the Nasdaq would likely be moving forward on our application even though alcohol and tobacco cause far more deaths and societal damage than cannabis ever will,” MassRoots CEO Isaac Dietrich stated in a press release. “Moreover, the Nasdaq has already listed at least four biotechnology companies that extract compounds from the cannabis plant for scientific research — actually touching the plant as part of their business model.”

The marijuana business news of late isn’t all bleak, though. Last month Microsoft announced it was partnering with Kind Financial, a software company that assists cannabis business owners in complying with regulations. This marks the first partnership between Microsoft and a company in the marijuana business, and it’s also the first major corporation to enter into such a relationship. Although this move does not include Microsoft becoming directly involved with the retail aspect of the business, industry insiders say it can serve as a shift in perception of the industry overall…a shift that MedMen and MassRoots will certainly be ready for.