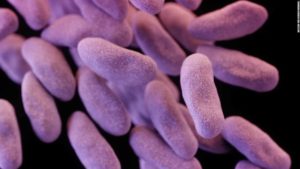 Two superbug outbreaks occurred in Los Angeles hospitals within the last year, after patients were exposed to deadly bacteria during a medical procedure. The culprits in both outbreaks were unclean duodenoscopes, medical devices used for endoscopic retrograde cholangiopancreatography (ERCP).

ERCP, which studies the bile duct, pancreatic duct and gallbladder, is a fairly non-invasive medical procedure performed about 500,000 times in the U.S. each year. It can save lives by draining fluids from ducts blocked by tumors or gallstones.

Compared to other endoscopes, duodenoscopes have a complex design, and are therefore difficult to clean properly. In between patients, they undergo the same cleaning and disinfection protocols as other endoscopes, called “reprocessing.” But it remains unknown how compliant hospitals are to protocol, as well as how effective the protocols are at completely removing pathogens.

When not cleaned properly, or when cleaning procedures fail, the scopes can harbor dangerous bacteria. At UCLA Ronald Reagan Medical Center, as many as 179 patients were exposed to Carbapenem-resistant Enterobacteriaceae (CRE) between October 2014 and January 2015; two of those patients died. Across town, at Cedars-Sinai Medical Center, 67 patients may have been exposed to CRE from a duodenoscope and four patients were confirmed as infected.

CRE is considered a “superbug,” a type of pathogenic organism that’s difficult to eradicate because of its resistance to antibiotics. The rise of antibiotic-resistant bacteria is a major health crisis in this country, especially in hospitals, where it’s easier for pathogens to spread between patients. About 2 million people in the U.S. face superbug infections each year, and 23,000 die from them. President Obama recognized the danger, and signed an executive order in September 2014 launching an effort to beat back the rise of resistant bacteria.

In August, the FDA sent letters to the three companies that produced scopes linked to the UCLA infections, apprising them of their role in the outbreaks and stating that they failed to guarantee the devices could be cleaned properly.

The FDA ordered the three manufacturing companies to conduct studies that will help inform future infection control practices. Specifically, the companies must determine how well people in the healthcare setting are following cleaning and disinfection instructions; what percentage of devices remain contaminated post-cleaning; and the reasons why some devices remain contaminated after following proper disinfection protocols. The studies are to be completed within thirty days.

The postmarket surveillance studies mark “a significant step in the effort to combat infections spread through duodenoscopes,” said William Maisel, chief scientist at the FDA’s Center for Devices and Radiological Health, in a statement. “These studies… may provide additional information to inform the FDA’s actions to protect the public health and help reduce the risk of infections.”

The CDC’s investigation into the CRE outbreak at UCLA showed no evidence of failure to follow proper reprocessing protocol, which puts the burden of responsibility on the manufacturing companies. These studies will be an important way to ensure the safety of those who undergo ERCP in the future, a vital procedure with no alternative.