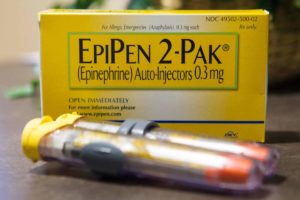 It’s hard to have a discussion about the problems in healthcare without getting around to the problem of soaring prescription drug prices. And perhaps nothing epitomizes that price-tag soar more than the infamous EpiPen hike: between 2010 and 2016, pharmaceutical manufacturer Mylan (which includes Mylan Inc. and Mylan Specialty L.P.) raised the cost of its drug by around 400%.

With that kind of price spike and the imagined profits it affords, it may cause cognitive dissonance to know that Mylan was the defendant in a False Claims Act lawsuit that accused the company of underpayment via a scheme that allowed them to rake in unjust gains at the Medicaid Drug Rebate Program’s expense.

Recently the Department of Justice (DOJ) announced the result of a qui tam lawsuit against Mylan: without admitting liability, the pharmaceutical company has agreed to settle the claims of alleged misconduct by paying $465 million in restitution to the government. Beyond the settlement, Mylan has entered into a corporate integrity agreement with the Department of Health and Human Services Office of Inspector General (HHS-OIG) that will subject the company to ongoing review of its Medicaid Drug Rebate Program practices over the next five years.

The whistleblower in the case was drug manufacturer Sanofi-Aventis US, LLC; it alleged that Pennsylvania-based Mylan deliberately (and incorrectly) classified EpiPen as a generic drug. For a pharmaceutical to be categorized as generic, there must be other products on the market that offer similar treatment results. And yet, that wasn’t the case for EpiPen.

The possible motive for the generic misclassification?

The Medicaid Drug Rebate Program stipulates that rebates coming from drug makers of unique products (“single-source”) must be higher than those with competing generics on the market. This is intended to protect Medicaid from price-gouging by pharmaceutical companies.

Further, the Medicaid program has an inflation adjustment provision for rebates on brand-name drugs: when the drug’s cost exceeds the average rate of inflation, drug makers will need to accordingly increase the rebates they pay the program. Generic drug rebates do not hinge on rates of inflation.

Therefore, Mylan was accused of using the generic categorization to undercut Medicaid rebates, paying far less under the generic flag than it would have under name-brand. Despite EpiPen’s staggering 400% price increase over just six years, the DOJ says Mylan’s rate of rebate reimbursement to Medicaid was fixed at 13% during that time.

“Mylan misclassified its brand name drug, EpiPen, to profit at the expense of the Medicaid program,” said Acting United States Attorney William D. Weinreb in a DOJ press release. “Taxpayers rightly expect companies like Mylan that receive payments from taxpayer-funded programs to scrupulously follow the rules. We will continue to protect the integrity of Medicaid and ensure a level playing field for pharmaceutical companies.”

The DOJ’s Civil Division and the U.S. Attorney’s Office for the District of Massachusetts headed up the investigation. Medicaid Fraud Control Units, HHS-OIG, and other state attorneys general were also involved with investigating the case.

“This settlement demonstrates the Department of Justice’s unwavering commitment to hold pharmaceutical companies accountable for schemes to overbill Medicaid, a taxpayer-funded program whose purpose is to help the poor and disabled,” said Acting Assistant Attorney General Chad A. Readler of the DOJ’s Civil Division in the press release. “Drug manufacturers must abide by their legal obligations to pay appropriate rebates to state Medicaid programs.”

Sanofi-Aventis is slated to receive around $38.7 million from Mylan’s total restitution for its role as relator.