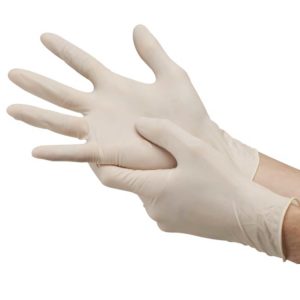 Powdered medical gloves, often used for surgery and patient examination, may soon become a thing of the past. The U.S. Food and Drug Administration (FDA) is now proposing a ban on powder in the medical gloves physicians use to examine patients and to perform surgery.

Over the years, manufacturers have used different powders, known as absorbable dusting powders (ADP), to make gloves easier to put on. Now, the most common type of powder found on medical gloves is cornstarch. In the past, however, gloves had club moss spores or ground fine pollen, and later, talcum powder. Each of these types of ADP was found to pose health risks to patients by causing granulomas and post-surgical adhesions.

As early as 1997, it was known that cornstarch powder can adhere to proteins on latex that cause allergic, hypersensitivity and inflammatory reactions. The FDA published a Medical Glove Powder Report that year describing these possibilities. But at the time, the alternatives were not ideal: using chlorination as a lubricant can physically and mechanically compromise the gloves, and polymer coatings were too expensive for widespread use. The FDA feared causing a market shortage of medical gloves, and thus did not ban ADP despite the evidence that it can harm patients (they did, however, impose a warning label requirement).

FDA too little too late?

The FDA received two petitions from Public Citizen, a national consumer advocacy nonprofit, regarding the dangers of ADP: one in 1998, and another in 2011. Dr. Michael Carome, deputy director of Public Citizen’s Health Research Group, argued in 2011 that the FDA was failing to protect American citizens by continuing to allow the use of powdered medical gloves.

The gloves can cause grave danger to patients, Public Citizen contended: life-threatening asthma attacks or anaphylactic shock, or post-operative infections and inflammation. The FDA, they said, is “lagging dangerously behind other countries that have moved to limit the use of a harmful product.”

With this newly proposed ban, the FDA is heeding the concerns voiced by Public Citizen, even if years later. The FDA has stated that warning labels do not adequately alleviate the “unreasonable and substantial risk of illness or injury,” and that further steps must thus be taken to prevent problems for patients.

Comments on the proposal are allowed until June 20, 2016. If the ban then passes and the rule is finalized, all gloves containing ADP must be taken off the market.