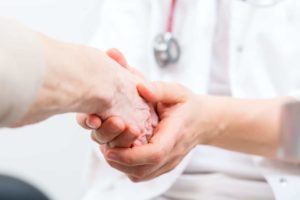 Although the law that permits terminally-ill patients to die by medically-assisted suicide has only been in effect in California since June 9th, it’s already being challenged. The American Academy of Medical Ethics, the Life Legal Defense Foundation, and several physicians have asked that The End of Life Option Act be suspended. Last week, Riverside County Superior Court Judge Daniel A. Ottolia rejected the request, preserving the law for now.

However, Judge Ottolia did not slam the door on plaintiff concerns. He agreed to give physicians room to engage in their lawsuit, an argument that rests on the premise that the aid-in-dying law is lacking measures to prevent abuse. Supporters of the law say that if it is suspended, terminally-ill patients may be forced to undergo the extreme suffering of protracted, painful deaths.

For one patient, the law provides “an immeasurable sense of peace”

Elizabeth Wallner of Sacramento suffers with stage IV colon cancer. She attended last week’s hearing and reported that she shed tears of relief when the judge struck down the motion to rescind the law.

“I want to have the ability to control the end of life and protect my child from watching me be tortured to death,” Wallner said. “It just gave me an immeasurable sense of peace.”

Those against the law say that bringing about death before it naturally occurs is morally objectionable, and further, that it sets up the potential dynamic of patient coercion by family members who believe the option is best for the individual. Opponents also bring up the possibility of patients using The End of Life Option Act as a means to escape overwhelmingly high, unpaid medical bills.

Plaintiffs argue that the law leaves patients vulnerable to coercion

Stephen Larson is an attorney representing the plaintiffs. He states that his clients want nothing less than the law declared unconstitutional. Referring to the potential for abuse, he said, “There are plenty of cases of elderly people suffering and people just want them gone. This [law] makes it too easy.”

Larson also argues that physicians are not held accountable after they prescribe the lethal prescription, and further, deciding that a patient has six months or less to live is an arbitrary distinction. (The law requires two doctors to independently make that determination before the lethal meds can be prescribed.)

Regarding patient coercion, the state attorney general’s office pointed out that the law stipulates that the patient must be mentally competent, making a voluntary, informed decision, and capable of taking the prescription on his/her own. And regarding physician involvement, the spokesperson from the attorney general’s office noted that doctors are not obligated to prescribe the lethal meds simply because an individual asks.

Dr. Terrell VanAken is medical director for hospice and palliative care at NorthBay Health Care in Fairfield. He suspects it will be a real challenge for California patients to connect with doctors choosing to participate in the aid-in-dying law, most notably in rural areas. On that note, VanAken says that, including himself, there are only three participating doctors at NorthBay; the facility staffs over 200 physicians in all.

For now, the law stands. But both sides will continue to argue for their positions when they return to court on December 5th.

Oregon has offered the end-of-life option for nearly 20 years…perhaps it can serve as an example?

There are currently four other states that allow doctor-assisted suicide: Oregon, Washington, Montana, and Vermont. Colorado may soon join these states and California if the measure on the ballot is endorsed by voters in November’s election. Oregon stands as the first state to provide its terminally-ill residents the option to choose to end their lives with the help of a physician, signing the option into law in 1997.