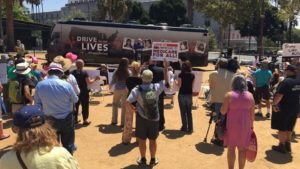 Last Friday marked the death of the GOP attempt to repeal the Affordable Care Act (ACA), a Republican upset that was, to put it lightly, surprising. But supporters of the ACA didn’t let the fact that three Republican senators voted down the “skinny” repeal lull them into complacency. Protests over the expected Republican success in unraveling Obamacare had been planned well in advance of the vote, and on Saturday, they went on anyway, although the focus had shifted to one of healthcare protection.

After all, there’s no guarantee some version of the GOP measure won’t rise from the ashes.

Our Lives on the Line is an alliance among several healthcare organizations (like Doctors for America, Health care for America Now, and Physicians for Reproductive Health) and progressive groups like Indivisible, MoveOn.org, and Progress Now), and Saturday was a day of action, marked by pro-ACA rallies, one in Los Angeles.

Around 100 people came together outside City Hall in L.A. to show their support for Obamacare, many holding signs proclaiming things like “Keep your tiny hands away! ACA is here to stay!” and “Healthcare is a human right.” A few rally participants went a step further and added a costume: zombies displayed signs that said: “GOP Healthcare Horror! Their bad ideas just won’t die!”

And true to form and eerily demonstrating why supporters of the ACA shouldn’t set aside their protest signs just yet, Trump lashed out over the GOP defeat on Twitter Saturday morning: “If a new HealthCare Bill is not approved quickly, BAILOUTS for Insurance Companies and BAILOUTS for Members of Congress will end very soon!”

Speakers at the rally included activists, healthcare professionals, patients, and elected officials; some used the threatening tweet to inspire those in attendance to remain vigilant over the healthcare rights they have and how fervently this administration is trying to wrest those rights away.

Representative Jimmy Gomez (D-Los Angeles) acknowledged that in terms of how the vote went down, GOP Senators Susan Collins (Me.), Lisa Murkowski (Ak.), and John McCain (Az.) were the ones that effectively quashed the repeal on the Senate floor, but that in truth, the ACA is still intact thanks to constituent pressure.

“No matter how much credit we give them, this victory belongs to all of you. For everyone who made calls, marched, told their stories or were just plain loud, thank you so much,” Gomez said. “This defeat is a major victory for working-class families in this country.”

And Saturday’s event represented more than a discrete celebration/show of support: it was also a look to the future.

Bus will swing through swing states

The Our Lives on the Line day of action officially kicked off the “Drive for Our Lives” bus tour that will take place this month. The tour will include 18 states in all and will gather and share stories of individuals who would have lost their healthcare if the majority of Republicans had had their way last Friday. Tour stops will include swing states like Arizona, Colorado, and Nevada, where Democrats are eyeing congressional seats open in 2018.

“Thank you for everything you’re going to continue to do tomorrow and the day after and in the weeks and months to come to make sure they do not take away our healthcare and to make sure we get universal healthcare for everyone,” Councilman Bonin told the assembled crowd. “Let’s stay engaged, let’s stay part of the fight.”