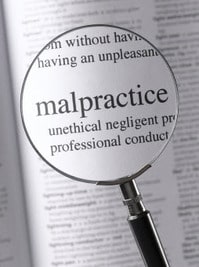 When it comes to patient lawsuits that involve serious injuries, it appears that internal medicine doctors are more likely to be sued than physicians working in more specialized areas. This according to a recent study by The Doctors Company (the country’s largest doctor-owned medical malpractice insurer).

The authors of the study observed that this imbalance might be attributed to “the important role internists have in the diagnostic process, as well as to the wide variety of conditions they treat.”

How internists fared in the study

Researchers studied nearly 1,200 closed claims made against internists between 2007-2014. Limiting their focus to high-severity injuries, they examined five areas involved in the cases: most common patient injuries, contributing factors of injuries, most common allegations made by patients, risk mitigation strategies, and most common clinical conditions resulting in patient harm.

Among the internal medicine claims, issues related to diagnosis occurred at a rate of 4 in 10 (39% of the claims studied). Patients sustaining injuries in these cases alleged that their physicians either failed to accurately diagnose their conditions or failed to promptly diagnose them. The most common diagnoses in this category were myocardial infarction (6%), colorectal cancer (5%), lung cancer (5%), and prostate cancer (3%).

In the cases studied, incorrect diagnoses commonly involved some type of failure—for instance, a failure to order necessary tests, to address abnormal results, or to establish a differential diagnosis (or some combination of the three). Regarding patient allegations that diagnostic tests were not ordered early enough, those testing tools included CT scans, mammograms, colonoscopies, blood panels, x-rays, MRIs, ultrasounds, biopsies, EKGs/echocardiograms, and PET scans.

After the factors involving diagnoses, the next two most common patient claims against internists—comprising 32% of the claims examined—fell into the category of medical treatment (which included a failure to order appropriate diagnostic tests, or a delay in ordering them), followed by errors involved with prescription medications (19%).

Fifty-seven percent of the patient injuries occurred in the doctor’s office or clinic; 34% in hospitals; 5% in skilled nursing facilities; and 4% in other facilities.

The authors of the study advise a commonsense approach for physicians to reduce their risk of lawsuits, including: