Nutrition Before Prescription: Can a Healthy Diet Usurp Medication as the Country’s Go-To Remedy? 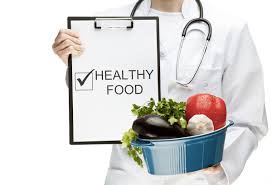 Although there’s no way to deny that the pharmaceutical industry in the U.S. is alive and well—offering cures for conditions up and down the alphabet, from acne to warts and beyond—there’s a relatively new movement that’s knocking prescription drugs off the pedestal of health and replacing them with food.

Many medications do indeed achieve what they promise, but many also come with a bevvy of unwanted or unpleasant side effects. And many others, while treating the presenting symptom, don’t necessarily address the root cause of the ailment.

Hippocrates’ urging: “Let food be thy medicine and medicine be thy food.”

Those words were said by Hippocrates, the founder of medicine, but many modern patients would likely be confused (or even disgruntled) if they were sent out of their doctor’s office clutching a metaphoric carrot instead of a prescription. However, the tide may be turning back to Hippocrates’ logic of nutritive food, albeit incrementally.

Increasing numbers of medical practitioners are opting for an holistic approach to treating patients—an approach that doesn’t abandon traditional medication when needed, but also brings in the power of nutrition for creating and maintaining health.

Integrative medicine has its eye on the healing power of nutrition

The integrative medicine program at UC Davis was created five years ago with the goal of exploring how plant-based nutrition can prevent disease. Rosane Oliveira is the program’s director; she offers physicians a new perspective on food—one that sees optimum nutrition as a vital ingredient to good medicine.

“Most medical schools will have around 14 hours of nutrition over four years,” Oliveira says. “They are learning the biochemistry of nutrition but not how it relates to disease or the reversal of disease.”

And of course because doctors are people too and need to eat, they can’t help but absorb information for themselves while they’re thinking about the impact on their patients. One of Oliveira’s classes, Lifestyle Medicine, focuses on the connection between eating well and living well. And though it’s tough to study a patient’s eating habits with the goal of using that data to apply generally, it’s hard to refute the copious anecdotal information revealing dramatic health transformations based solely on positive changes in diet (things like choosing whole foods over processed, plant-based over meats, and reducing salt, sugar and “bad” fats).

Small, successful steps are better than leaps that lack follow-through

Most people balk when they’re asked to radically change their eating habits, which is why Oliveira recommends a realistic, step-wise approach…one dietary change per month (for instance, she’ll ask students to stop eating cheese, and later, all dairy products). Lasting success is more likely when people make smaller changes over time and have a chance to grow into those changes, rather than feeling deprived by all of their eating habits being upended at once.

Oliveira acknowledges that even with the current broader awareness of food-based treatment, most doctors and patients will not look to nutrition first. However, she is hopeful about real change on a larger scale: “I believe the shift is going to come,” she says. “It has to be like everything else—a grass-roots movement. Why are more grocery stores carrying more plant-based foods? It comes from us asking about it.”

Although food as preventative or healing medicine has a long way to go before it takes hold in the majority of the population, the mindset is certainly gaining traction. And with that momentum comes the tendency to trust the body rather than to (perhaps prematurely) rush in and apply a medication Band-Aid. As Dr. Andrew Weil has said, “The best way to detoxify is to stop putting toxic things into the body and depend upon its own mechanisms.”