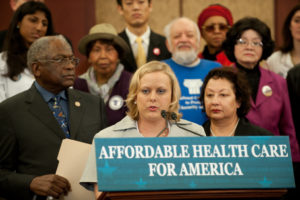 The Supreme Court of the United States (SCOTUS) is in the midst of deciding Zubik v. Burwell, a group of cases focused on the Affordable Care Act’s mandate that employers cover employees’ birth control. Religious non-profits, including the Roman Catholic Archbishop of Washington, East Texas Baptist University, Little Sisters of the Poor Home for the Aged in Denver, and Southern Nazarene University, are petitioning for a flat-out exemption from being complicit in contraception coverage.

When legislators were working on approving the Affordable Care Act (also known as ObamaCare), one of the issues was whether Christian churches would be required to provide birth control coverage for their employees. Ultimately, the compromise made in order to get the legislation passed was that churches would be exempt from this mandate. But religious nonprofits, which are often run by church organizations, were not included in this exemption; currently, their only way around the mandate is to facilitate other arrangements for their employees to get birth control without directly providing it themselves.

Now, those religious nonprofits are pushing back, arguing that the requirement to facilitate birth control coverage in any way violates their religious liberty. The administration doesn’t want to extend the church exemption, and lower courts are divided on the issue.

Lawyers for the religious organizations argue that making these groups complicit in providing access to birth control is a violation of the Religious Freedom Restoration Act of 1993. “The Little Sisters of the Poor and their co-petitioners face a dilemma that the Religious Freedom Restoration Act does not allow,” began Paul Clement, speaking on behalf of the petitioners in the oral arguments.

“They can adhere to their religious beliefs and pay millions of dollars in penalties, or they can take steps that they believe to be religiously and morally objectionable, and that the government deems necessary, for them to provide contraception coverage through their health care plans.”

On March 29, the Supreme Court issued an order asking for more information from both sides about how employees could access contraception from insurance companies without involving their employers. With only 8 justices to vote since the death of Justice Antonin Scalia in February, this nontraditional approach could signify that the court is trying to avoid a 4-4 split. If the court ultimately splits 4-4, the lower courts’ prior decisions would stand and the law would be interpreted and administered differently in different circuits. The administration and the petitioners may submit additional briefs in response to SCOTUS’ order until April 20.

The court hopes to strike a balance between maintaining women’s rights to access birth control without compromise religious nonprofits’ ability to exercise their religious beliefs. They seek to create a system that religious nonprofits will accept, that does not jeopardize access to birth control, one of the original lynchpins of the Affordable Care Act. If such a system can’t be worked out, the court will most likely remain split.

Eight of the nine federal appeals courts that have voted on this have upheld the Obama administration’s perspective; thus, if the court splits, the religious nonprofits’ challenge will fail throughout most of the country.