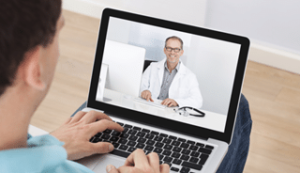 Dr. Peter Yellowlees, a professor of psychiatry at the University of California, Davis, has made a prediction that may not sound especially far-fetched to healthcare providers and patients:

“In 10 years, telepsychiatry may well become a core component of psychiatric care.”

Dr. Yellowlees is a member of the Committee on Telepsychiatry recently formed by the American Psychiatric Association (APA). He adds, “For people under 40, connecting with therapists on screens seems both reasonable and normal.”

Reaching beyond the four walls of the office

It’s undeniable that more and more of our intra- and interpersonal needs are being met via some facet of the Internet (and that young people are especially savvy in navigating the world online), but recent advances in telemedicine in general, and telepsychiatry in particular, have made the reality of remotely connecting psychiatrist and patient a boon for a wide range of individuals.

Dr. James Varrell is the president and medical director of InSight Telepsychiatry, which provides telepsychiatry services to clinics and private users. He notes a pattern among patients with certain psychological struggles in that they’re more likely to follow through on treatment recommendations in the tele-setting. “They do better in response to this service, as opposed to being in a room with one to two adults who are pointing out what’s wrong with them,” he says. “They open up more through this medium.”

Beyond the patient comfort noted by Dr. Varrell in certain cases, there are clearly many others who find this approach worthwhile, to the point where there is no “typical” telepsychiatry patient. Indeed, the range is so broad that it seems to include everyone: from children to the elderly; from those with relatively mild depression to those experiencing a psychotic episode; those who speak English and those who don’t; those in rural communities (“underserved” in the sense that psychiatrists often aren’t readily available) as well as those in urban areas (where ease of scheduling is another appeal). “Ultimately people are absolutely able to do it,” Varrell says. “We haven’t had any group unable to do it.” (This includes incarcerated members of the population.)

Although the concept of linking doctor and patient via computers, tablets, or smartphones feels quite high-tech, the idea behind telepsychiatry has actually been around since 1959, when the State of Nebraska linked the state mental hospital and the Nebraska Psychiatric Institute via closed-circuit TV for the purposes of teaching first-year medical students.

Fast-forward to 1995, when the U.S. Department of Veterans Affairs began exploring ‘telemental health.’ Since then, over two million video sessions have been conducted by the VA. Current estimates put the number of VA psychiatry patients accessing treatment remotely at eight percent. Although the VA presently operates its telemental health under the hub model (in which patients visit one of hundreds of clinics nationwide), there are plans to utilize a system that would allow a patient to access treatment on his/her personal devices. (The telecommunication medium must not potentially violate patients’ confidentiality; not all current means of teleconferencing freely available to the public offer that level of security.)

Telepsychiatry may have been hailed as the new frontier in mental health, but it’s not without its detractors. When it comes to practitioners reading “cues” on a patient, perhaps nothing can take the place of in-person contact. But technology is attempting to keep pace: for instance, cameras can bring the patient’s face into close focus so that the clinician can detect dilation of the pupils or facial expressions that may reflect underlying emotional struggles or truths. And even among those who acknowledge telepsychiatry’s advantages, there are doctors who express concern that some of the “human touch” is lost while working in this medium.

APA backs telepsychiatry and commits to broadening its reach

At its meeting in April, the APA’s Board of Trustees approved the establishment of the Committee on Telepsychiatry (under the Council on Healthcare Systems and Financing), which will continue the work of the Board’s ad hoc work group on telepsychiatry. The work group’s chair, Jay Shore, M.D., suggested to the Board that “the APA should take a leadership role in advocating for and educating about telepsychiatry at the national and state levels to improve access to care.”

The work group further recommended that the APA give thought and discussion to the following issues:

Partnering with the American Telemedicine Association on a joint telepsychiatry guideline;

Working with the American Association of Directors of Psychiatric Residency Training to develop educational materials for training programs;

Among the Committee’s goals:

The Committee’s overarching objective is to broaden the scope of telepsychiatry, namely through scaling the barriers that threaten to impede its growth. For example, currently doctors are limited to treating patients living in the state in which the clinician is licensed. The APA is working to reduce the red tape for doctors who wish to explore interstate licensure. The second obstacle involves payment: in some states, insurance companies provide little-to-no coverage for telepsychiatry, which clearly will keep it out of reach for many patients.

Despite the fact that InSight Telepsychiatry manages a staff of doctors who treat patients in 26 states, telepsychiatry is not as widespread as it’s likely to be in time, if the generally positive outlook on it is any indication of its future. Insurance and regulatory issues have undoubtedly tempered the growth of this branch of telemedicine. To date, South Carolina, California, Texas and Colorado lead the way in making this treatment option available to residents, but when the obstacles are surmounted, it’s likely that Dr. Yellowlees’ prediction comes true.